Although the first double glazed units were experimented with in the 1950s, it was not until the early 1980s that the double glazing industry really took off. Until that time, window frames had been manufactured in steel (e.g. Crittall windows) and / or timber. Companies such as Stormseal, Anglian Windows, Everest, Zenith and Staybrite emerged as national suppliers of aluminium windows and doors fitted with insulating sealed glass units.

The late 1980s and early 1990s saw the rise of UPVC (or PVC-U) windows and doors. UPVC frames are manufactured from a thermoplastic polymer known as unplasticised polyvinyl chloride, a rigid and cost-effective plastic that is ideal for forming building materials.  Giving the ‘U’ to UPVC, the word ‘unplasticised’ is used here in the engineering sense, i.e. it is another way of saying ‘rigid’.

The fenestration industry is organized as shown in this diagram: 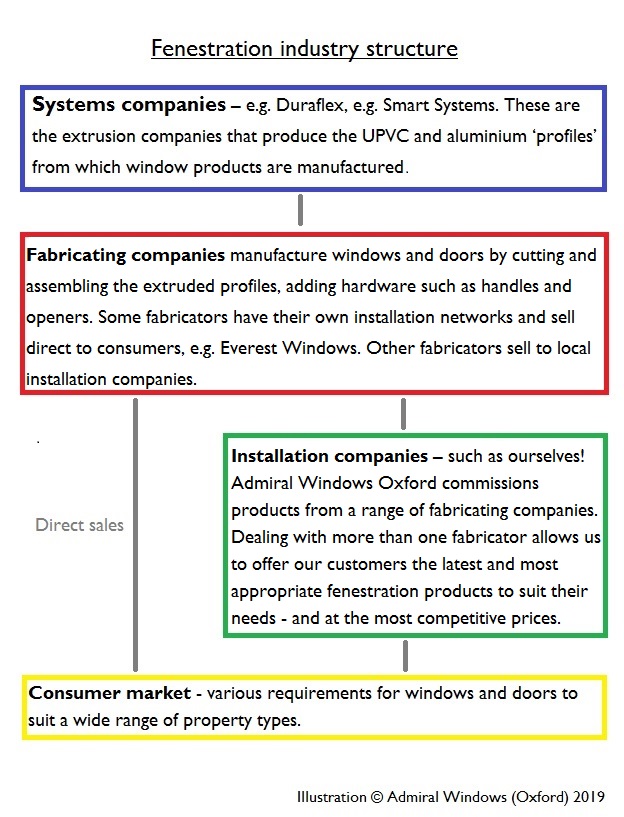 You might think that, by incorporating installation into their direct sales approach, national companies such as Everest would undercut local companies as a matter of course. Well, web forum threads such as this one show that the reverse is often the case!

View all posts by admiralchilton